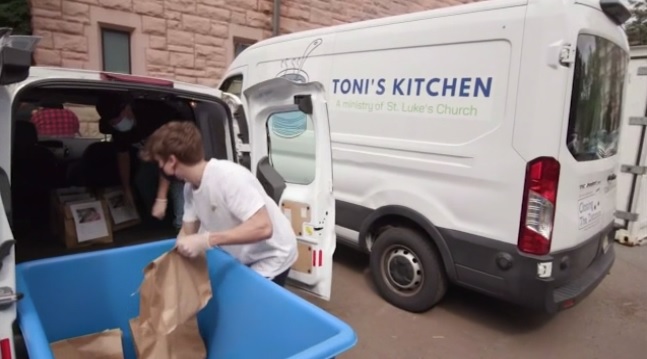 ABC News recently aired a story that featured Toni's Kitchen.  The story was part of an ABC News series called "America Strong," which looks at stories about how Americans have remained resilient during the Covid pandemic.  Toni's Kitchen was featured because of the amazing work done by Executive Director Anne Mernin, the Toni's Kitchen staff, and all of the volunteers to meet the increased need in our community that hit when Covid began in March of 2020.

ABC News sent a crew to Toni's Kitchen to interview Anne and St. Luke's Episcopal Church Rector The Rev. John Mennell.  Also included in the story was an interview with Executive Vice President and Chief Operating Officer of Feeding America, Katie Fitzgerald, talking about how soup kitchens and food banks proved to be so resilient during Covid.

The story was reported by ABC News Reporter Morgan Norwood.  It aired on more than 100 ABC TV stations across the country, and was featured on ABC News digital platforms as well.

You can watch the story here: