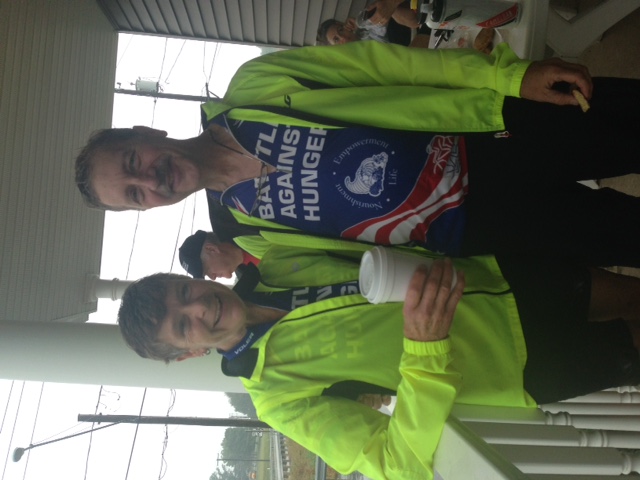 To mark the 40th anniversary of Toni’s Kitchen in 2022, we are doing a series of interviews with current and former volunteers, supporters, and friends of Toni’s to talk about the history and the future of Toni’s Kitchen.  These interviews will be published throughout the year on our website at toniskitchen.org.

You can’t talk about the history of Toni’s Kitchen without talking about Pat Moulton and Jim Snodgrass. Pat and Jim were longtime volunteers at Toni’s Kitchen whose work helped grow Toni’s into more than just a soup kitchen by developing health and nutrition programs, support systems for assisting guests, and better financial oversight.

Pat first became involved with Toni’s Kitchen in 2004, and Jim started in 2006. They met when they were both serving on the Toni’s Advisory Board and later got married!

Jim says that they worked on Toni’s finances as one of their first projects. “I guess the first think I took on real quick was we decided we had to get some kind of reporting on the finances. So Pat brought in a format from the Red Cross and we copied it. And I guess I served as the first treasurer just because I could do that.”

Another initiative was providing guests with computers to help them with various life tasks, like job searches and computer literacy.

“We got donated computers from somewhere,” said Jim. “Our office put them together and beefed them up. And yeah, we opened it up to the guests before and after lunch a little while so they could do different things. And we did, we helped people get IDs and solve some kinds of problems with them. There was a relative that somebody was able to track down and start corresponding with that they hadn't been in touch with for years.”

Pat developed a number of health and safety initiatives that really improved the service that Toni’s was able to provide to guests. Regular screenings for blood pressure and glucose levels were introduced. “We had some education classes where we had training or education about diabetes,” Pat says. “And that was absolutely priceless because we had some glucometers that had been donated to us and the sticks that go with it.”

There was also a focus on nutrition for the guests.

“We brought in [volunteer] Cathie Squatrito who consulted with us as a dietician, and Kathy would come in and do some education classes for the guests,” Pat recalled. “She worked for six or seven years behind the scenes consulting with us on the nutritional content of the meals, and really upgraded the content of the meals.”

Jim and Pat also worked on various projects to improve the Toni’s Kitchen space through the years, like a major kitchen renovation.

At the core of all of the work that Pat and Jim did was the importance of helping to improve the lives of the guests in all ways. Jim says the atmosphere and the environment that Toni’s created for the guests was as nourishing as the meals that were served.

“Yes, they were there for the food,” he says. “But equally important at least was for the fellowship with their fellow guests, with the volunteers, the people who greet them at the door and by name and give them respect. And I think that's what amazed me about Toni's from the very start. Just how everybody was working together. It wasn't somebody on one side of the table handing food to somebody on the other side of the counter. We were all on the same side. And it was so meaningful.”

Both Pat and Jim agree that Toni’s Kitchen has had a big impact on the Montclair community.

“I think it took away the fear,” Jim says. “All of a sudden someone that's dressed shabbily and wandering the streets is not looked at with fear. It was more like, ‘How can we help?’ And we did talk about our guests with respect, and their backgrounds, and [there were] some amazing people, and sort of humanized them.”

Pat and Jim would also go above and beyond to help individual guests in need. They helped one particular guest by bringing food to his home, talking with him, staying in touch with him, working to help get him needed services. The spirit of helping others that Pat and Jim demonstrate lives in all of the volunteers and supporters at Toni’s Kitchen.

Jim and Pat were asked to describe Toni’s Kitchen in one word. For Jim, the word is “amazing.” For Pat, it’s “magnificent.”

These two words are also a perfect fit for these two people who have improved countless lives over the years with their amazing and magnificent work at Toni’s Kitchen.